Beyond the buzz of the Colaba Causeway, as one proceeds towards Navy Nagar, a salty stench starts to permeate the air – a mix of fish, sweat and the sea. For most of us, this is the smell of Mumbai but for the fisherfolk at the Sassoon Dock (seen in the image above), where the stench leads to, this is the smell of life.

This smell of Mumbai might overwhelm your senses at first but as you walk through the dock, taking in its various sights and that one consistent smell, you find yourself getting used to it. As Gregory David Roberts wrote in Shantaram, “At Sassoon Dock… the smell of prawns, drying in the sun in pink mountains, made my stomach flip, but when we caught sight of the sea the stench was lost in the strong breeze. Nearer to the docks we threaded our way through crowds of men pushing handcarts, and women carrying baskets on their heads, all bearing crushed ice and a burden of fish.”

David Sassoon and his Jewish family arrived in Bombay in 1832 after fleeing Baghdad to run away from a corrupt governor – if a merchant refused to pay him, he would arrest someone from his family. The Sassoon family started trading in opium, spices and cotton, and later engaged in philanthropy by building a library, a hospital, and a dock in the city — all well-known iconic landmarks in the south of the city.

Bustling with people before the crack of dawn, the Sassoon Dock draws in a plethora of people who work like a chain – from bringing fish from the sea to our homes. It starts with the fishermen who are out at sea for days; COVID restrictions, Cyclone Tauktae, and Climate Change have all led to lower catches and smaller fish. Depending on its size, each trawler goes out to sea for between two to 30 days. Once a trawler arrives at the dock with the catch, the boat owner auctions the stock. The buyers include vendors who sell at the local markets and to export companies. After the fish are sold, the paati kamgars (dock workers) load the baskets of fish on their handcarts or carry them on their heads. The fish, packed in crushed ice, is loaded in handcarts and transported in tempos to the buyers’ locations.

Question of Cities takes you on a walk through the Sassoon Dock, its myriad activities and businesses, and the people who make it the dynamic and vibrant space it is.

‘Sassoon Dock Estd 1871’ reads a plaque on the unmissable old clock tower at the entrance. The spectacular piece of history welcomes you to Mumbai’s oldest wet dock built by Albert (Abdullah) David Sassoon in 1875 on reclaimed land. The bustling area now serves as the commercial district for the fisherfolk. The largest wholesale fish market in Mumbai, the Sassoon Dock is all set to undergo a makeover.

The mornings see a frenzy of activity in the sprawling dock area–bringing in fresh catch, auctioning it for wholesale and export, and packing it in ice. The lanes that lead to the Dock from the clocktower are a maze of busy people pulling carts, carrying fish, crushing ice and loading the stock into boxes. One side of the dock is dedicated to the local wholesale fish market (seen covered with tin sheets in the photo) while the other brings in fish that is to be exported. As a boat, owned by the Kulaba (Colaba) Kolis, pulls up at the dock carrying smaller fish such as Jawla, Karandi, Kolambi and Bombil (Bombay Duck), the fisherfolk crowd near the edge–to catch the catch. The fishermen toss baskets of fish at the waiting people, who deftly catch them. The buyers then haggle to get the best price for the fish, as the paati kamgars (dock workers) wait to be assigned a load. Most of the haul is bought by people who dry and sell fish. A paati kamgar pulls a handcart loaded with fish which will be packed and exported. Climate Change and erratic modern fishing methods have affected the quality and quantity of the catch. Boats that used to bring 100 to 200 baskets of Bombil in one trip, now bring only around four baskets of fish. Most types of fish that were once found in abundance are now either scarce like the Pomfret and or extinct like the Chapti Rani (Flat Pink Perch). Some others which had not been seen off the coast of Mumbai now appear in abundance. Asha Rajesh Patil (left), 35,and Vimal Rakh, in her 50s, have been working as paati kamgars at the Sassoon Dock their entire lives. They are here for at least five hours  every morning carrying the sold fish to the buyers. The buyers either sell the catch at the local market or to export companies. “We could work in people’s homes but for that we’d have to be regular. Here, we can choose to take a day off,”says Rakh. They earn around Rs 10 for every phera (round), earning between Rs 300 and Rs 400 a day. The tin-roofed shed is noisy and teeming with workers. The vivid colours and the characteristic odour fill the busy space. More than 200 workers, mostly women, are busy shelling prawns, transported from the auction site by the paati kamgars. Most of the people have been doing this for as long as they can remember. Their children join in on school holidays. Once shelled and sorted, the fish are ready to be sent to their next destination – to be sold in retail markets or exported. Keru Thorat, 65, is a handcart owner at the Dock. He has been working here for the past 40 years and now heads a team of eight to 10 men. Thorat, hailing from Ahmednagar district, migrated to Mumbai in search of a job. He comes to the Dock at 3.30am and leaves after the loading and unloading is done. “The only thing that this dock functions on is trust. We have fixed customers and they tell us to load and unload, pack and transport the stock to the tempos. But never has anyone stolen even a single fish while doing so. We will buy, but not steal,” says Thorat. After the prawns are shelled and fish sorted, Meeru Kashyap (left) and Raj Kumar pack them in crushed ice. Ice keeps the catch fresh till it reaches its destination. Keru Thorat says that he and his men have to establish a good rapport with the sellers, buyers, and even the ice providers. Ice is a critical component in the economy of fishing. “Without ice, there would be no fish in markets,” he says. Lata Kailash Bhahe, in her 50s, has been selling fish since 1982. She says she has been coming to the dock since she was a child and learnt how to buy and sell fish. “I did not go to school but I know exactly how to bargain while buying and selling fish,” says Bhahe, who buys and sells fish at the dock from 3.30am everyday. “I have spent my entire life here. How am I not supposed to know what Math works here? I couldn’t sell all the crabs today, so I will store them in an ice-packed box and sell them tomorrow.” Like a lot of businesses, selling fish has gone online owing to the pandemic. The auction for the online sellers starts at as early as 1am everyday. The freshest of the catch is sold to them first. On being asked how her stock remains safe here, she reiterates what Thorat said. “No one touches other’s stuff here. We all live like a community. If we don’t trust each other, we will not be able to function.” Revathi Avinash Koli (right), 47, belongs to the community of the Kulaba Kolis. She owns a boat that catches fish such as Jawla, Karandi, Kolambi and Bombil in the waters around Mumbai. Her family has been in this business for four generations. She says that commercial net fishing and light fishing even during the off season have resulted in smaller catches. Here, she is planning a pilgrimage to their clan god Khandoba and goddess Ekvira also known as Kolyanchi Mauli (embossed on the T-shirt). Tempos and other vehicles wait outside the dock gate to be loaded with boxes of ice-packed fish to be transported to buyers. An estimated 1,50,000 people earn their livelihood directly and indirectly through the dock which is said to have a turnover of Rs 2 crore a day. Before the COVID lockdown, around 1,500 trawlers operated at the Sassoon Dock, bringing in almost 200 tonnes of catch. Baskets used for carrying fish are hung outside a warehouse in one of the lanes,  signalling the monsoon break when the dock shuts from June 1 till Narali Purnima in August. The fishing season is from March to May and August to November every year. The large trawlers that venture out deep into the sea come back to the shore for repair and maintenance in the off-season. The smaller boats sometimes venture into the sea but don’t go far. Most of the people working at the dock go back to their towns and villages to return before the season resumes – and be a part of the centuries-old organised chaos and culture at the Sassoon Dock.

A dock that was built for trade and business has not only created and sustained a community of fisherfolk but also nurtured their culture around the activity. The Sassoon Dock, like much of Mumbai, is set to undergo a major revamp. The makeover is expected to help 10,000 fisherfolk who work at the dock and the output is supposed to go up by 48 metric tonnes with the help of modern technology, Mahadev Jankar, the then minister for Animal Husbandry, Dairy Development and Fisheries Development of Maharashtra, had said in 2018.

The 147-year-old dock has stood the test of time, witnessed major historical moments and managed to develop a working system for itself and its people over the years. Here’s hoping the revamped dock manages to retain the charm, history and culture of the place – and respect the community that makes it the space it has been.

Dnyaneshwari Burghate, a post-graduate in Women’s Studies with additional qualifications in media, is a researcher, photographer, and story-teller.  She documents stories at the intersection of gender, media and society. She has shot the photographs for this photo essay. 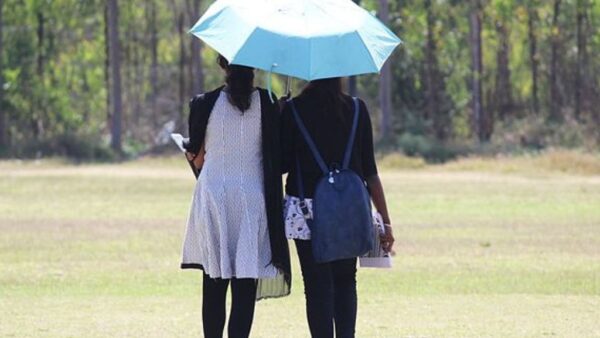 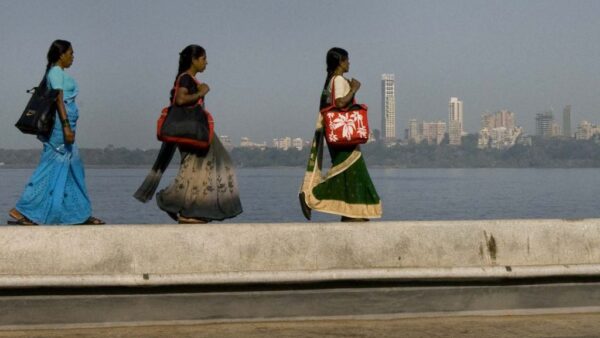 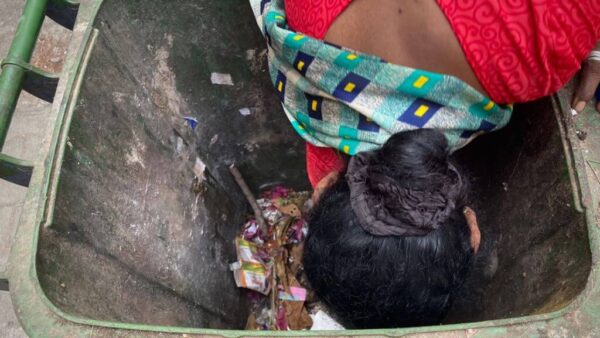 It’s a continuous struggle for ragpickers, mostly women, to earn even a meagre amount for survival. They have to brace extreme heat…
By Maahi ShahOctober 21, 2022