Your stories, your essays 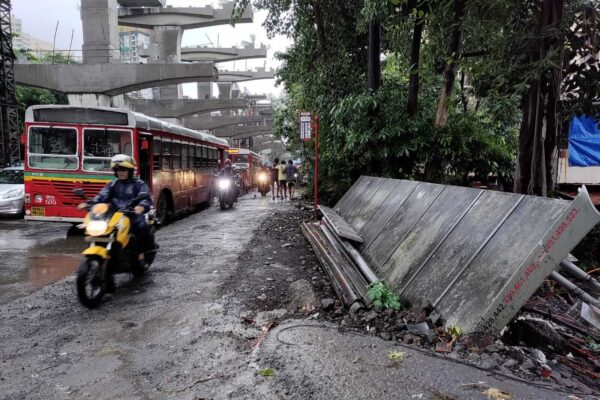 Dear BEST, why are accessible and safe bus stops so difficult to make?

Travelling a stretch of 2.6 kms to and from my rented apartment on the Jogeshwari Vikhroli Link Road (JVLR) to Jogeshwari station for work or leisure presents me with two options: Wait at the bus stop that’s only a pole in the pavement with no lights or covering or seats, or live beyond my monthly transport budget by taking rickshaws. What is the choice here?

The JVLR, 10.6-kilometre-long six-lane road connects the Western Express Highway and Eastern Express Highway in Mumbai. As an arterial road which ferries lakhs of people and vehicles between the western and eastern parts of the city, it has a strong network of the local BEST buses – both the regular large diesel and the new compact air-conditioned vehicles. Large sections of this road tend to be congested on most days thanks to the metro rail construction.

I happen to live on the western section of the JVLR and rely on bus route A-442 to commute to Jogeshwari station (East) and back home from work or play. The bus has been turned into an air-conditioned mini-bus. Finding a seat is a dream that seldom comes true. The conductor-less bus halts for too long – often up to 10 minutes – for a conductor at a bus stop to issue tickets to everyone on board. But it is the state of the bus stops that I want to focus on.

On my way to the railway station lie at least 10 bus stops, including Kalpataru Estate, Shyam Nagar, Datta Tekdi, and so on, and approximately four to five thousand people take this route daily. These “bus stops” are hardly recognisable as bus stops, given their poor condition and lack of basic infrastructure; often a tiny board listing bus routes is placed high up on a flag pole dug into the pavement to show that it is a “bus stop”.

Majas Depot is a busy depot on this stretch but it too does not have a designated bus stop. To pick up and drop off commuters, buses halt right on the road, leading to congestion at that point especially during peak hours. Vehicles honking from behind force the bus driver to restart the bus in a hurry, jeopardising the lives and limbs of commuters boarding the bus. At the Kalpataru stop, the shelter lies discarded on the pavement, and benches are upside down or strewn on the pavement, forcing commuters to wait literally on the busy road for their buses.

The Datta Tekdi stop (in the picture above) is only a board without even a designated place for commuters to wait. The entire bus stop and the benches have caved into the road. The side of the road and pavement are frequently occupied by bikers, leaving little room for people to form queues for buses. A new commuter like me would find it hard to recognise this as a bus stop in an international city like Mumbai. I often depend on the kindness of the bus drivers to stop and wait at the right spot. The lack of shelters means there are often no lights, making the spot unsafe for commuters, especially women, at night.

This is repeated tens of times at various “bus stops” across Mumbai. The city’s BEST bus service is 147 years old, one of the oldest transport services in the country, and is often lauded for the nearly three million commuters it carries every day through rain and sunshine, something that Mumbaikars are proud of. However, the bus stops are far from accessible and safe, let alone be commuter-friendly. This leads many to opt for private or semi-private transport which adds to the congestion and air pollution; those of us who cannot afford it are forced to jeopardise our safety at such “bus stops”.

Surely, the BEST authorities can do better and build bus stops as bus stops are meant to be.

Dnyaneshwari Burghate, a post-graduate in Women’s Studies with additional qualifications in media, is a researcher, photographer, and story-teller.  She documents stories at the intersection of gender, media and society. 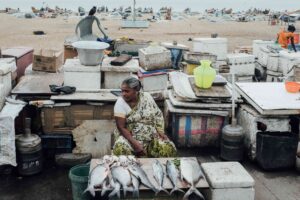