Delhi’s bus travel has never been smooth for women — almost every second one of us has been touched inappropriately, stared at, and been the butt of uncharitable remarks by male commuters inside buses or at the bus stops. Be it teenagers, working women, adolescents, or even middle-aged mothers, every woman would have some ordeal of her own to narrate.

Public transport systems, especially the Delhi Transport Corporation (DTC) buses, are amongst the best connected and affordable, in fact virtually free of cost since the ‘pink ticket’ policy was introduced in 2019. Such a critical transport system in a large city like Delhi should have offered women commuters safe and reassuring travel but the Delhi bus has always been a dangerous space – unavoidable but dangerous – for women.

The lack of safety meant that women chose the bus for only the absolutely essential commute, which led to this space being accessed less with every passing year. Then the Aam Aadmi Party government introduced the ‘pink ticket’ concept in 2019, only months before the state Assembly elections, purportedly to reach out to its women voters.

In principle, it is a laudable scheme. It allows women to travel on the bus network without paying for tickets. Studies have shown that the scheme has increased women ridership, and has even become an alternative to the more expensive Metro. The DTC buses have a better last-mile connectivity than the metro, making them a better choice. The buses are also perhaps more friendly to the working classes and less intimidating than the metro.

Making intra-city commute accessible to women shows in the numbers collated immediately after the second wave of the pandemic last year. Ridership data of the DTC between March to July 2021 showed that a staggering 76 per cent of commuters had traveled on ‘pink tickets’. Of 20 lakh plus tickets issued in the three months, over 15 lakh were in this category issued to women travellers.

The presence of women in DTC buses has clearly increased, perhaps as an outcome of the ‘pink ticket’ scheme but the higher presence of women has not made bus travel any safer for them. Staring, passing lewd remarks, groping are still everyday issues that women commuters put up with.

Mitali Bhatnagar, a resident of Satya Niketan, speaks about being groped when she was travelling in a bus after the second wave of COVID-19 last year. The 26-year-old copywriter takes a bus to her office in Okhla-II. Bhatnagar was standing near the front door of a crowded bus, as her stop was a few minutes away. As her stop approached, a crowd gathered behind her, jostling to get down. “One of the men took advantage of the crowd and touched me inappropriately,” she said.

After a harrowing experience, Nidhi Bhardwaj, a college student, is even scared to wait at bus stops. “I was waiting at the Naroji Nagar stop around 8 pm when a man approached and asked me the time. He then refused to step away and I could feel him ogling at my chest,” said Bhardwaj.

Anecdotes are many and borne out by data too. A survey commissioned by the Delhi Police showed that almost 45 per cent of the reported cases of molestation was in public buses followed by 25 per cent were at the roadside. Women do feel unsafe in the dark, but what’s eye-opening is that the survey showed that 31 per cent reported feeling unsafe even in the afternoon. In another study done by NGO AID India, comprising 200 young women in Delhi, 175 reported that they had faced incidents of sexual harassment in public, primarily in buses and on the roadside.

Infrastructure solution?
Harassment, as a concept, can be traced to apathy towards a human being and is essentially a behavioural tendency, it’s at once legal and social, individual and societal. Can infrastructure and planning help in this domain, make cities and transport safer for all classes of women? Infrastructure, or physical infrastructure, alone may not address the issue comprehensively and quick-fix solutions to the problem, actually a malaise, often fail. However, there is a case for reviewing how urban planning or infrastructure can help to create safer public places and transport.

The Delhi administration must understand that this problem can only be best addressed by socially sensitising citizens as well as planning for inherently safer infrastructure. Increasing social engagement at bus stops, by establishing small shops, can also make women comfortable.

Not only buses, but also bus stops, should be considered a key part of transit spaces. Women must feel safe throughout their journey – from the time they leave home, wait and board the bus and till they reach their destination. Every woman in the capital city knows the fear of travelling in public transport and walking home at night, especially through deserted streets.

Safety in public spaces, especially public transport, can be defined by the ‘fear of crime’. Instead of actual crime and its repercussions, the fear of crime instils a sense of vulnerability and anxiety, which have a wide-ranging impact on women’s perception of how they use public spaces. It defines how women move in such spaces, and often outweighs the actual number of crimes reported.

The ‘fear of crime’ results from multi-faceted factors, such as the location of a bus stand, social incivilities, and availability of safe public transport, including also the effectiveness of police machinery.

The distinct unease
A few months ago, I boarded a bus from Jangpura to my home in Safdarjung Enclave at 10pm. The bus had only five commuters – a male passenger, bus driver, conductor, and a policeman, besides me. As I prepared to alight at my stop, the bus driver smiled and casually asked, “Why are you travelling alone so late at night?”

Taken aback, I could not reply. I suddenly became aware of my body, the closed door of the vehicle, the presence of the four men in that space, and just turned my face away. The bus driver looked at the policeman and started laughing, chatting about how women in the city had progressed beyond his understanding.

Incidents like this, which might not even fall under the ambit of legal definitions of harassment, create distinct discomfort, even alarm, after the infamous December 2012 “Nirbhaya” rape case. As women who have to negotiate our way around this kind of atmosphere almost every day, we suppress the anger, refrain from speaking our mind, and quietly go through this ‘violence in everyday life’.

It does not spare any woman. My mother was travelling in a crowded bus from Connaught Place to Safdarjung when a young man sneakily pulled her dupatta and dropped it on the floor. She complained to the policeman in the bus and screamed at the man after second-guessing herself multiple times. He was sent away with a simple warning.

More women staff
It is pertinent that women become a part of the system that sustains Delhi’s public transport. Delhi buses need more women drivers and women conductors for us to feel safe. The government needs to sensitise its drivers and conductors, and importantly plan safer infrastructure, which does not curtail the freedom of movement. Delhi has only one woman bus driver and 1,200 conductors but they too must be facing sexual harassment and unsafe situations at work.

Delhi, across multiple studies, including one by the Reuters Foundation in 2017, has been reported as the most unsafe city for women. Despite multiple attempts, National Crime Records Bureau data shows that crimes against women continue to rise in the capital. The situation was so bad that, at one time, women were afraid to board Route 544 as it had become infamous for sexual harassment of Delhi University students.

A survey by Breakthrough India in 2021 across Delhi and few other cities, about two years after the introduction of ‘pink ticket’ policy, showed that 68 per cent of women experienced violence while taking public transport. One of the reasons is that the DTC fleet has a low number of government buses and runs on private clustered buses – barely 60 per cent of the fleet of 7,000 are government owned.

Media reports early this year stated that the government has not bought new buses since the Commonwealth Games of 2010. Urban mobility experts believe that Delhi needs at least 11,000 buses for a comfortable public transport system. With the city being short of 5,000 buses, it only adds to travel woes, unreliable schedules and long waits at bus stops, and overcrowding in the buses – all of which add to the lack of safety.

Getting onto a DTC bus during peak office hours requires a woman to give up all her safety concerns.  Buses that travel longer routes arrive after every 20-30 minutes. Even with a free ticket, the travel is not pleasant.

The government’s ‘pink ticket’ is welcome but it must also work to make women commuters feel safe. Even the small act of installing signboards at bus stops that indicate the time for the next bus, like in Delhi Metro, can ease the situation somewhat. For women to feel confident and safe about using buses, the Delhi government must understand that free travel is not all; it is only a part of a comprehensive planning and process to make commuting safer for women. Public transport – and public places – have to be safer for us.

Priyali Dhingra is a multimedia journalist based in New Delhi with an interest in visual storytelling. She reports on issues of gender, labour, politics, environment and urban inequality in New Delhi and Hyderabad. 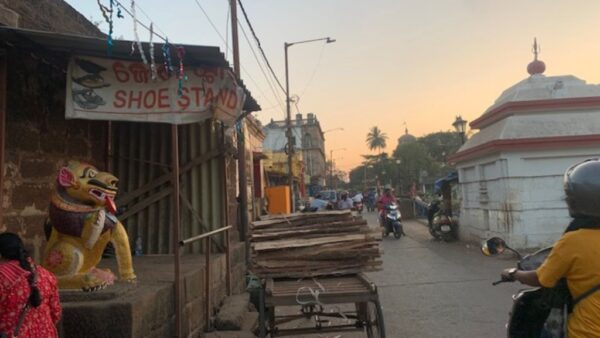