It was in the 1980-90s that the political economy of Mumbai began to be transformed from one centred around manufacturing to one centred on services and real estate. Between 1961 and 1981, the number of industrial units in Greater Bombay registered an increase, but after the textile mills strike of 1982-83, there was an unprecedented negative growth in manufacturing employment, while the share of the tertiary sector in the city’s Gross District Domestic Produce (GDDP) increased substantially.

The transformation produced a highly dualistic service sector, with low-income contractual work in the informal sector, and a low-employment generating, highly skill-based segment on the other.

This transformation represented, and reflected in, a shift in the function of land in the urban economy. In an industrial city, urban land is seen as a cost on industry and labour, and therefore not only labour but also capital has an interest in ensuring a check on land values.

The function of urban planning and public housing until the 1980s was to reconcile [1] the demands of the formal working class with the needs of the urban-industrial system. But once the city’s textile mills were shut down, almost overnight, land value capture became the prime mover of urban development with settlements of the poor and “undeveloped” areas now recast as “sub-optimal use” of urban land.

Urban land, in this real estate-driven vision [2], is recast as an exclusive object of private accumulation and exchange, and urban planning as merely one of the many ways through which property values can be elevated.

Real estate is now the major mode of capital accumulation in our cities. From resettlement of the poor in the peripheral floodplains [3] of Chennai to the shrinking of the Kolkata wetlands [4], from the expropriation of the rural grasslands [5] of Bengaluru to the displacement of Mumbai’s slum dwellers for infrastructure and beautification [6] projects – concerns of labour and environment are increasingly subordinated to urban renewal ventures driven by real estate and financial interests.

Land occupied by low-income residents, rent-controlled and public housing neighbourhoods, and ecologically valuable lands are now seen as under-capitalised assets that sell for a value much lower than their “potential” price. When transformed through change in land use, demolition and conversion of ownership and occupancy, these lands become suitable for highly remunerative (re)development.

Mumbai’s current land-use planning regime crystallised in 1980s and 1990s as a close entanglement of city and state governments’ interests with those of the property industry; for the government to achieve its electoral goals, it would need to rely on the city’s real estate developers. And in order to be interested, the developers – through their various lobbies – demanded more concessions from the government.

The city’s low-income residents can benefit (health and educational facilities, low-cost housing) only through cross-subsidy. This is mainly the share that the developer hands over to the public authority in exchange of various “incentives” such as additional development rights and “relaxations” to build according to planning regulations. The planning system [7] is therefore expertly manipulated to ensure the profitability of the real estate sector so that if property developers do not get enough, the city gets nothing.

What this means, in concrete terms, is that ecological conservation, social equality and the well-being of future generations are all seen by the real estate lobbies as constraints on “growth” and “development” as they understand the concepts. Urban planning is then reconfigured to entrench the commodity value of land and benefit those who seek the right to profit from land at the cost of all those who demand the right to use land for personal, public and productive use.

We, therefore, need to urgently reclaim the conception of urban land as a collective good. Such a conception ought to reinstate the valuation of urban land in terms of ecological services, customary uses and social welfare, all those values that have been rendered irrelevant by the logic of real estate speculation. Rather than posing urban problems in terms of entitlements, property rights and incentives, we will need to pose them in terms of socio-ecological equality — defined in terms of access to social infrastructure, living space, social infrastructure, ecosystem services and livelihood opportunities.

Hussain Indorewala teaches at the Kamla Raheja Vidyanidhi Institute of Architecture and Environmental Studies (KRVIA) in Mumbai and is a PhD researcher at the Indian Institute of Technology, Bombay.

The myths of ‘public trust’ and ‘affordable housing’ in speculative Mumbai

The development story of Mumbai rests on the routine breach of the ‘public trust doctrine’ which benefits the elite. The Maharashtra government,…
By Hussain IndorewalaSeptember 9, 2022 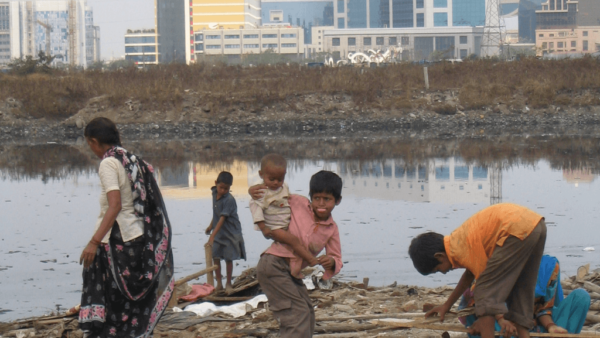 Nivara Hakk then and now: The struggle for housing rights

As slums were demolished in massive operations and slum dwellers summarily evicted, often out of Bombay (as it was called till 1995),…
By Gurbir SinghSeptember 9, 2022

The regulations are rooted in the building codes that were drawn up for the city after the plague of 1896 but, over…
By Jashvitha DhageySeptember 9, 2022